Use the page below to find out more about the Sam Wanamaker Playhouse – explore fun facts, photos, trailers and more.

The Sam Wanamaker Playhouse is located on our site in London, next to the Globe Theatre.

Named in honour of our founder, the Playhouse is based on indoor candlelit theatres known to Shakespeare and his contemporaries. It’s not a reconstruction of a specific venue, but it echoes the Blackfriars Playhouse, used by Shakespeare’s theatre company from 1609.

Lit by over one hundred beeswax candles, the intimate Sam Wanamaker Playhouse hosts plays, concerts, education workshops and events throughout the year. Its main theatrical season runs from October to April but there’s a full programme of events all through the summer, too.

It was always Sam Wanamaker’s intention that Shakespeare’s Globe should include an indoor theatre, and the brick shell for the Playhouse was built at the same time as the rest of the Globe site. But it wasn’t until 2012 that work began to turn the shell into a playing space.

The Globe’s Architecture Research Group worked with architects Allies & Morrison to design an ‘archetype’ of London’s early modern indoor playhouses. Underlying the design is a set of blueprints for a late seventeenth century playhouse drawn up by John Webb, Inigo Jones’s former assistant. These sketches provided the basis for the layout of the Sam Wanamaker Playhouse.

Modern facilities, including lighting and a sophisticated ventilation system, are built into the structure. These resources allow us to stage plays under pure candlelight with confidence and safety.

The Playhouse is made out of a frame of green oak that sits within a brick shell.

The decorative features in the Playhouse are based on those in recorded or surviving Jacobean buildings.

Shakespeare’s later works such as The Tempest were written for performance in a theatre like the Sam Wanamaker Playhouse.

The attic winch allows for sophisticated flying effects. Shakespeare’s Blackfriars had a winch too – but our technology is more 21st century!

The painted ceiling is based on an early seventeenth century mural in Cullen House, a former stately home in Scotland.

The Sam Wanamaker Playhouse opened in January 2014 with a production of John Webster’s The Duchess of Malfi, directed by Dominic Dromgoole.

The decoration of the Sam Wanamaker Playhouse was influenced by what we knew about the elaborately-painted indoor playhouses of Shakespeare’s time. As it cost more to visit an indoor playhouse (than an outdoor one), at the time they attracted a richer audience and so were always spectacularly decorated with rich colours that shone brightly in the candlelight.

Prior to decorating our present-day Playhouse ceiling, our researchers gathered information about carving and decoration methods used in original indoor playhouses. The final mural was based on photographs of a seventeenth-century ceiling in Scotland’s former Cullen House (also known as the ‘Astral Ceiling’) – the original design showing the goddess of the moon between clouds, stars, cherubs and putti. The Cullen House ceiling was damaged beyond repair by a fire in 1987.

The entire of the Sam Wanamaker ceiling was painted with these motifs – the piece created by a specialist team, led by artist Zaza Opperman. It was painted in panels on the ground, off-site, before being put together in the theatre, assembling for all to see. 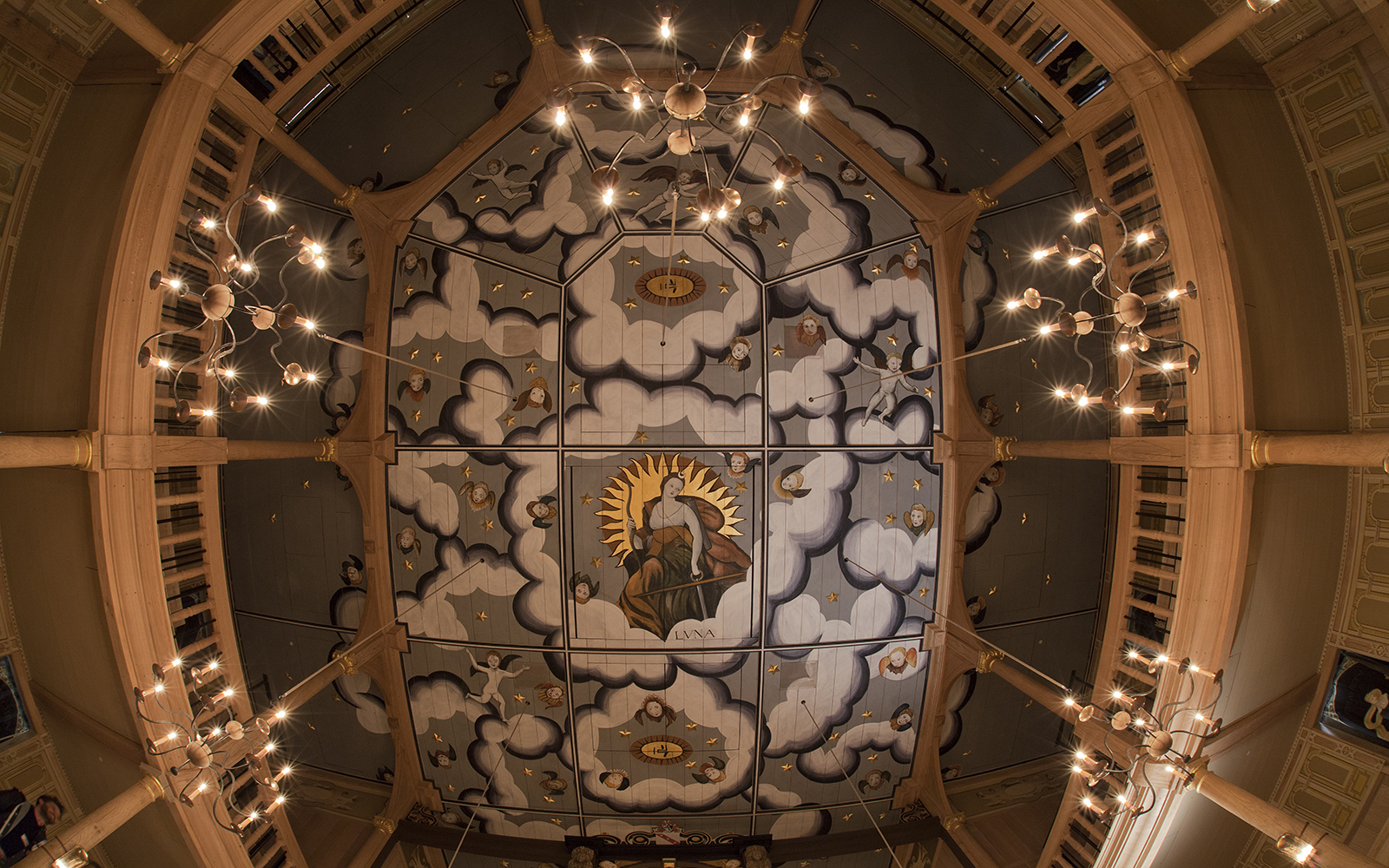 The Playhouse captured by photographer Pete Le May.

Previous trailers for productions will give you a taster of what a performance in the Sam Wanamaker Playhouse is like.

Visit our full YouTube Playlist to see a collection of archive videos for events and projects that took place in the Sam Wanamaker Playhouse from 2017 – 2020.

Secrets of the Sam Wanamaker Playhouse

The Sam Wanamaker Playhouse in photos

Transforming our Sam Wanamaker Playhouse into a recording studio

An introduction to the indoor Jacobean theatre

Everything you need to know about the Globe Theatre

A record label from Shakespeare’s Globe