Is Richard III a sequel?

Shakespeare’s history play is often considered a standalone, but it may also be part of a larger chronological series

Shakespeare’s history plays are usually packaged in big chunk – as we’ve done over this Summer and Winter Season. Henry IV Part One and Part Two, Henry VI One, Two, and Three… It’s obvious from the titles that these plays are meant to go together, to finish one another’s stories. Richard III, on the other hand, doesn’t have quite the same reputation. We’re used to seeing it stand alone. But this Winter, we found ourselves wondering: What happens if we think about it as a sequel?

Richard III’s in-between status – both sequel and standalone – stretches back to Shakespeare’s time. Richard III was a notorious villain of the Elizabethan period, thanks to Tudor propaganda that tried to justify the accession of Elizabeth’s grandfather, Henry VII, who defeated Richard III in battle and had a somewhat tenuous claim to the throne. (His claim is a long story that even Shakespeare doesn’t really bother trying to explain.) There was at least one other play about Richard III before Shakespeare’s, meaning that even audience members who couldn’t access expensive history books probably already had a version of the story in their minds. Shakespeare’s play could be understood as a riff on known history, an existing legend.

‘Richard III was a notorious villain of the Elizabethan period, thanks to Tudor propaganda’

However, Shakespeare’s own version also originally existed as a sequel, the culmination of the collaborative series begun with the Henry VI plays. Chronologically and in terms of composition date, Richard III comes after Henry VI Part 3 (though in terms of history, there was one king in between: Richard’s older brother, King Edward IV). Richard’s story begins at the end of Henry VI Part 2, when he joins his father and brothers to fight for their family’s claim to the English crown… a crown Richard ultimately decides is best suited not for his older brothers, but for himself.

As with many of Shakespeare’s plays, we have two slightly different versions of Richard III, one printed during his lifetime in a series of small, relatively cheap quarto editions, and one found in the 1623 folio collection of his complete works, known as the First Folio. One of the differences between the quarto and folio is how much reference each text makes to the events of the Henry VI plays. Scholar John Jowett argues that despite being published earlier, the quarto presents the most up-to-date version of the text, edited based on performance – and perhaps, he suggests, with some backstory removed to help the more popular Richard III stand more easily on its own.

‘Despite being published earlier, the quarto of Richard III presents the most up-to-date version of the text’

But even the slimmed down version is dense with the characters’ personal histories. Many productions either cut or quickly gloss over these references, because they can be difficult to clarify in performance. They’re glancing references, not full history play exposition – characters talk about their past in the casual way real people do. Everyone mentions that Anne’s father was Warwick, but who is that anyway? What exactly does Richard’s brother Clarence feel so guilty about? And of course, there’s Queen Margaret, very frequently cut from productions because she is quite literally an emissary from the past, a holdover from the previous play, a ghost of a character who historically was dead by the time Richard III is set.

The Globe Ensemble in rehearsals 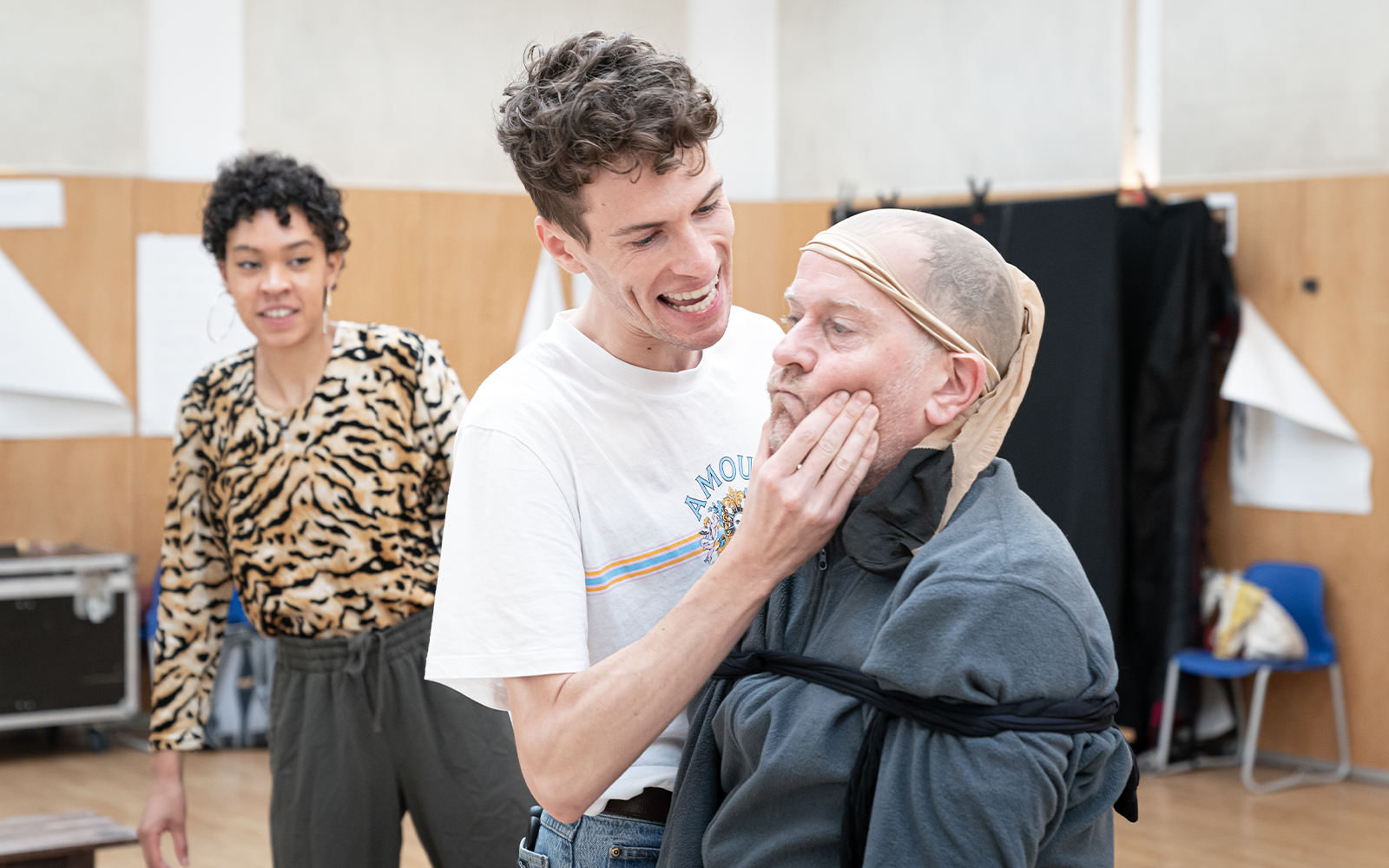 By performing Richard along with its prequels, all of these moments – and more – are made clear. We see and meet the powerful Warwick, we watch Clarence’s betrayal, we understand exactly how far Margaret has come. For a play that begins with the triumphant announcement of a new era, everyone is rather fixated on the past. Because we were able to dig into these looks backwards, because we had staged and experienced them, we were also to able to see how deep the obsessive rehearsing of old crimes runs in this play. Strip away the past, and you strip away an essential piece of Richard III’s puzzle.

Even without literally seeing Henry VI (though of course we think you should), the presence of this history transforms the world of Richard III, cracking open its familiar surface in ways even we didn’t quite expect. We hope you’ll join us for a look at a famous play in a new light.